This article from the HHMR Media archives is being provided as a free preview. For access to other archived articles from Bingisser’s Blog and additional premium content from other authors, become a member now.

When I came to Switzerland last May I began the search for one of Switzerland’s national icons: a mechanical Swiss watch. Every time I walked by a watch boutique at lunch, I peered in the windows at their offerings. The Swiss watches all offered great quality and design, unsurpassed craftsmanship, and a storied tradition. The first watch I tried on was a Maurice Lacroix. I loved their style, but was also drawn in by their slogan: Follow Your Convictions.

Maurice Lacroix’s slogan aptly describes me. Nearly everything I have done and every decision I have made over the past few years has been in pursuit of my unique dreams. I want to be an Olympic hammer thrower and I also want to be a top attorney. These are two time-consuming pursuits, but I haven’t compromised. I have followed my convictions. That is why I was out training before dawn in law school while most of my classmates slept. That is why I moved to rural Canada in search of the world’s top coach. And that is why I am now in Zurich working at one of the few jobs in the world that will allow me to pursue both my athletic and legal careers simultaneously. The hammer throw itself is a sport only for those that follow their convictions. There is no chance for riches, fame or glory. What is left is a group of determined athletes chasing their dream. As I described last month, my days are long, but it is worth it as the challenge of balancing it all in pursuit of that dream is a thrill in itself. And every day I also work on passing that dream along to others through the Evergreen Athletic Fund.

After trying on the Maurice Lacroix watch, I contacted them to see if they would be interested in sponsoring me. Luckily, they also felt I exemplified their slogan and invited me to become their newest brand ambassador. I am honored to accept. 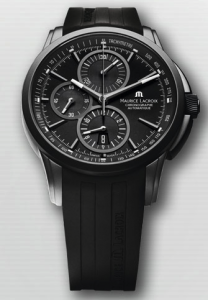 Maurice Lacroix not only tells people to follow their convictions, but they also lead by example. Their conviction is to produce fine timepieces that reflect the history of watchmaking while also advancing the craft even further. Their watches show their successes in this. They have become known for classic features like the retrograde, but also have produced some revolutionary designs like the first square wheel mechanism in a watch. But what made them stand out to me was their independence. The Swiss watch industry is dominated by three conglomerates who own nearly every top watch brand. One of the conglomerates also has a monopoly on producing the parts and movements that go into the watch itself. Maurice Lacroix, on the other hand, is independently owned and has become one of the few independent companies that produces their own watch movements and parts in-house, and thus earned the coveted “manufacture” title.

People buy a Swiss watch for different reasons. Many buy one just for the prestige. Those consumers are looking to buy a name they can put on their wrist. Others buy a watch for the design, the engineering, or the sheer wonder of watching time click by one mechanical cog at a time. These people look beyond the name on the dial and look inside the watch. These consumers buy a Maurice Lacroix. It’s the same reason I chose to throw hammer throw over other sports: it’s more fun.