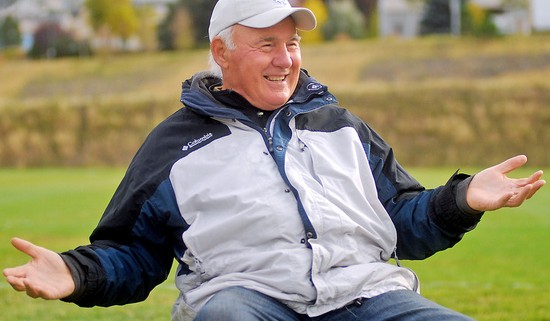 If you want to be a successful hammer thrower, curiosity is a requirement. Language skills are not. I’ve traveled the world in search of hammer throw enlightenment. Some coaches speak English, some do not. But they all speak hammer throw, and that transcends any language.

When I tell people that I’m coached by Anatoliy Bondarhcuk, their first questions tend revolve around his level of English proficiency. His English is actually relatively good after six years of living in Canada, as are the multiple other languages he speaks. However, when he first arrived it was another story. His advice was broken into choppy three or four word sentences. Onlookers seemed perplexed that we understood him, and were even more perplexed that we instinctively replied to him with our own version of broken English. But his messages nevertheless came through clearly. Sometimes you don’t need any extra words to say “push entry more” or “terrible” or even “double excellent.” I still remember one of his first pearls of wisdom to me: “If hammer feel heavy, then you pull. If push, then hammer feel light in hand.” He couldn’t have said it better if his English were perfect.