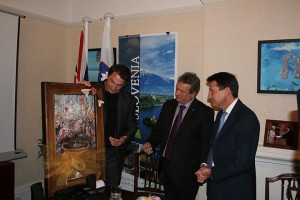 Defending Olympic champion Primož Kozmus travelled to London last week for the “London before London” event hosted by the Slovenian Embassy. Featured alongside Kozmus was Lord Sebastian Coe, the chairman of the London Olympic Games Organizing Committee. At the end of the evening the two took a minute to speak about the Diamond League hammer throw exclusion and Kozmus commented that “Lord Coe expressed his support and endeavors to bring [the hammer throw] back to this important track and field competition.”

The hammer throw has a long list of tasks it needs to do to increase its profile, and I write about this often. But the bottom line is that it needs put itself back in the headlines. And having a personable and likable face for the event helps tremendously. Kozmus has an infectious smile, fluent English, a quick mind, and his technique is a beauty to watch in the ring. He is a national hero at home after winning the first Olympic title in athletics for his country. Now that he has returned to the sport he is becoming a bigger name abroad too. He is the subject of an upcoming documentary series by IMG which features him alongside Roger Federer, Michael Phelps, Usain Bolt, and the world’s biggest stars. And he has the drive to advocate for the event. All this matters since it puts the hammer throw in the news and lets Kozmus be taken seriously by Lord Coe. After all, Lord Coe is not just heading up the 2012 Olympics; he also serves as the Vice President of the IAAF.

Over the last half century the hammer throw has been dominated by eastern Europeans. Right or wrong, this helped develop the stereotype of the hammer thrower as a stiff hairy Russian who spoke no English and admired his huge muscles. In reality, the event features some of the smartest athletes with relatively unassuming builds. With this stereotype it was not hard for the Diamond League to exclude an event that they and the fans cannot relate to. But recently the hammer throw has begun to develop some stars. Kozmus is one, and newly crowned world champion Koji Murofushi is another. He has long been known in Japan and amongst throwers worldwide, but journalists are also taking note. Just minutes after he won his first world title on August 29th, the popular British magazine Athletics Weekly asked people on Twitter “Is Murofushi the most likeable man in international athletics?” Like Kozmus, Murofushi gives a good interview, has a good story (he wrote his doctoral dissertation on the hammer throw), and has a family tradition in throwing. In a vote among throwers on the popular Mac Throw Video site in America, Murofushi won a against Christian Cantwell, Reese Hoffa, and other homegrown stars for the title “thrower of the year.” Even the Russian Sergej Litvinov Jr. is helping to dispel stereotypes. On the women’s side, Betty Heidler has proven to be a great face of the sport with media across Europe.

Kibwe Johnson with his gold medal at the 2011 Pan Am Games.

America also has a growing star. I arrived in Kamloops yesterday, but not before stopping in Bellingham for a beer with my friend and Western Washington University throwing coach Jarrod Roberts. He was reading an article by Tim Layden in Sports Illustrated this summer that asked who will be the face of the 2012 U.S. Olympic track and field team? Will it be Allyson Felix? Tyson Gay? David Oliver? They can all do a good job of representing the sport, but why not someone like Kibwé Johnson? Last week in Guadalajara, Johnson broke Lance Deal’s twelve year old Pan Am Games record en route to crushing the competition. He is becoming a strong force in an event that America is traditionally weak in. He is also a strong force in an event traditionally dominated by white throwers. He ended this season ranked fifth in the world and became the first black man ever to break 80 meters.* But more importantly he is funny and open. He frequently shares commentary and training insights on his website, whereas many other athletes provide just a superficial look at the behind the scenes life of a medal contender.

Our sport needs good competitions. We need good results. We need rivalries. But without some strong personalities, all those things mean little. The 2012 season will present two major opportunities for hammer throw to gain more exposure. First, the US Olympic Trials will feature a special hammer throw competition at the Nike World Headquarters. More than 5,000 fans are expected to see the first track and field athletes named to the US Olympics team. Second, the Olympic men’s hammer final will take place on the same night as the men’s 100m dash final. This is traditionally one of the most watched events at the Olympics, and that means many people may also get a chance to see the hammer throw. If the hammer throw can continue to develop the right stars and personalities before both events, it will have a big chance to get back into the spotlight.

* I do not think race plays a role in the hammer throw, but it is a topic that the media continues to focus on. When Christophe Lemaitre became the first white sprinter to break 10 seconds last year he was nominated for European athlete of the year even though he was not even ranked in the world’s top 10 (his fellow nominees were both world champions this year). However, to his credit, Lemaitre has downplayed the race factor and just focused on improving his times.