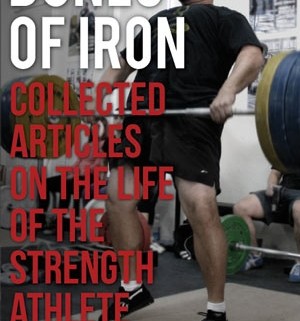 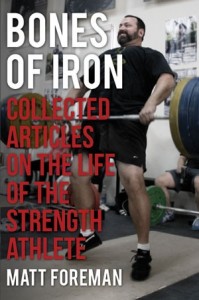 The worlds of Olympic weightlifting and the throwing events have much in common. I’m not just talking about the fact that we all use cleans and snatches as an important part of our training plan. I mean that at their core, the worlds are built with similar principles and similar people. Both sports require excruciating attention to detail. Both sports require thousands of repetitions to master the rhythm and balance of each attempt. And Olympic weightlifter Matt Foreman could have just as easily been describing the hammer throw in his new book Bones of Iron: Collected Articles on the Life of the Strength Athlete when he said “Our sport offers almost no money and promises pain, so only fanatics will survive for the long haul.” For these reasons, and the fact that Foreman runs a throwing club with more than 60 athletes, I picked up his recent book of musings on weightlifting and all things related.

I also have a very loose connection to Foreman. Back when I was in high school he was living and training in the Seattle area. I would occasionally run into throwers that he taught and coached at a small private school. I also had the privilege of doing a few training sessions with his then weightlifting coach, John Thrush. While his peak years are behind him, he now coaches and competes as a masters athlete. This book is essentially a collection of the regular articles he has written for Performance Menu Journal.