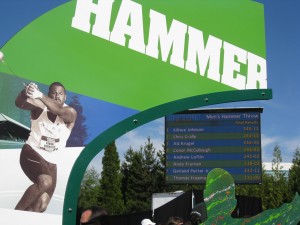 I’m sure Kibwe loves that they chose to use this picture of him on the logo.

The US Olympic Track and Field Trials got into action yesterday with a special event for the hammer throw taking place at the Nike World Headquarters in Beaverton, Oregon. An estimated crowd of 3,000 spectators swarmed the campus and they were welcomed by a rare sight for Oregonians this June: the sun. It seemed like everything lined up to produce a great event. In my season and meet previews I highlighted this as an event that was crucial for hammer throwers. With extra media and fans in attendance, throwers could either step up their game and give the media something special to write about, or they could make it just another event. The throwers definitely seized the opportunity and left all in attendance with a memorable experience and the outflow from the event is still coming in as media outlets have been writing about and praising the event non-stop for the past 24 hours.

At the end of the day, the US now has its first track and field Olympians: Kibwe Johnson, A.G. Kruger, Amber Campbell, Amanda Bingson, and Jessica Cosby. Three of the five will be making their first Olympic appearance. Congratulations! The final results are available here online for men and women. While I was unable to attend, both my family and many friends were there. After talking with them, reading all the media reports, these are a few things that stood out to me.

There was little that went according to plan, which makes for an entertaining competition to watch. Perhaps the only expected results were on the men’s side. Kibwe Johnson led from start to finish with a season’s best performance. Many actually did not expect him to win since he has just the fourth best mark in America this year. But after having trained with him for years I consider this an expected result. He would not have accepted anything less than a win here. As expected, Johnson will be joined on the Olympic team by three-time Olympian A.G. Kruger, who has had great consistency this year and will surely be looking to improve on his 25th and 26th place finishes the last two times around.

It was followed true to form that favorites Amber Campbell and Jessica Cosby both made the women’s team. While I thought Cosby would have been more competitive than her third place finish showed, she made the team and that is what the competition was all about. All three top finishers bettered the old meet record set by Cosby in 2008.

Where should I start? First off was the amazing performance by UNLV’s Amanda Bingson. Having entered the competition as the fourth seed, Bingson was no long shot to make the Olympic team. But her inconsistency this year did not put her on anyone’s short list. In fact, when I was interviewed on the House of Run podcast this week by Las Vegas natives Kevin and Jason and specifically asked about her prospects I said she would have her work cut out for her. I was hedging my words since I really didn’t think she had much of a chance after a disappointing third place finish at NCAAs. Not only did she need to place in the top three against tougher competition, she had to improve her personal best by a half-meter. Track superfan Jesse Squire agreed with me after the meet, saying “I saw her in person at NCAAs; she looked very much out of Olympic contention.” We couldn’t have been more wrong. Bingson came out of the gate strong and took the lead in round two. In round three she threw a personal best that was agonizingly close to the Olympic A standard. Then in round four she extended her lead and broke through the standard to all but secure her spot on the team. In the end she had to settle for second, but it took a season’s best by Amber Campbell to edge her by just two centimeters. Bingson had three throws over her old personal best and you could just see her beaming with excitement after the competition. 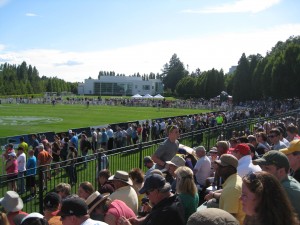 Bingson was just one of several women to step up. Three of the top five throwers had personal bests. Amy Haapenen and Keelin Godsey both broke 70 meters for the first time, meaning the top five were separated by little more than a meter. Even more impressive: five of the top six women had season’s bests. Combine that with some exciting lead changes and a supportive crowd made for a stunning competition. The stars like Cosby slightly underperformed, and A-standard holder Gwen Berry finished a distance seventh, but the energy of the underdogs more than made up for it.

The men’s competition featured fewer personal bests and fewer lead changes, but nevertheless had some great performances and kept the crowd entertained. The top three were separated by just more than a meter and the top six by little more than two meters. And three of the top six still threw season’s bests. With such a tightly packed field, the crowd waited in anticipation for a potential lead change. But Kibwe never relinquished his first round lead. The surprise was behind him. Former Sam Houston State All-American Chris Cralle moved into second place in round two and held off Kruger and others to keep it throughout the competition. Cralle had two throws over 74 meters and three throws over his old personal best. With a strong history of big meet performances in the past, I don’t know why Cralle wasn’t on my short list of podium finishers. But since he just turned 24 last week, he will definitely be a contender for the Olympics in four years. Despite his second place finish he did not make the Olympic team since he was still well short of the Olympic “A” qualifying standard. But in post race interviews he was nevertheless both optimistic and realistic about his performance and his ability to get the standard in the coming years.

No one considers a good performance by Conor McCullough expected. The former World Junior Champion almost always comes up big in championships, but he was definitely an unknown entering the meet. After withdrawing from the NCAA Championships at the last minute for eligibility reasons, everyone was unsure how he would respond at his first meet back. He put doubters to rest with fourth place finish. Not bad for a 21-year old in an event often dominated by those in their thirties. 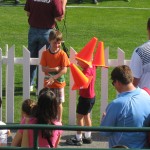 Even the kids got in on the fun.

With all this action, the media in attendance loved the event and, at least by the standards of hammer throwers, has written about it extensively. Portland’s leading newspaper the Oregonian has led the way on the coverage, providing live updates on their blog throughout the day. They quickly posted video interviews with individuals like Trials meet director Vin Lananna, to an emotional post-competition interview with UO grad and local fan favorite Britney Henry. While Henry was obviously disappointed with her performance, her interview shows the sacrifices and emotional investment that all the competitors put into the event. Unfortunately not everyone could make the team.

In addition to traditional media, the hammer throw garnered some unexpected coverage on internet sites such as LetsRun.com, a gathering place for distance runners. LetsRun posted the headline “Dude in Plain Green T Shirt Finishes Second” immediately after the competition. The title was in reference to Cralle’s second place finish. With no sponsors and no coach, Cralle trains on his own, lifts weights in his living room, and competes in a simple green t-shirt. In my view, he exemplifies the event and LetsRun loved it. They posted a video interview with him, their first ever with a hammer thrower. Hopefully it won’t be their last.

The Prospects for London

With the Olympic team now finalized, hammer throw fans can now look ahead six weeks to the London Olympic Games. The two men and three women will be among more than thirty competitors in each event. The women’s team is the strongest. At last year’s world championships, it took just 68.92 meters to make the final. While the level is expected to be higher in London, all three women are more than capable of throwing that. Campbell and Cosby have already made finals at the World Championships in the past and also have extra confidence and experience that will help them. While a medal is unlikely since it could take 75 to 76 meters, a top five finish would be the highest ever by an American woman.

The success of the men’s team will be harder to predict. Johnson seemed to be on the verge of a medal last season, but has struggled to find his form so far this year. If he can get back over 80 meters, he again enters the medal conversation and should at least make the finals. But he has a lot of work to do in the next month and a half. Kruger is also hard to gauge how he will react in London. He has limited international experience and prefers to compete more domestically. He placed just third yesterday and it will be even tougher when the competition is throwing 5 or even 8 meters further than they did yesterday. But recently it has only required around 75 meters to make the finals, a mark which he has thrown on multiple occasions this year and throughout his career. Even if just one of them make the final it would be a step forward for American hammer throwing. Since Lance Deal’s Olympic silver in 1996, not one American man has qualified for an Olympic or World Championship final. This is a streak that needs to end.