Psychologist Angela Duckworth has done some interesting research into what personality traits can be used as predictors for success in school and other ventures. IQ, for example, is actually a poor indicator of how high a student’s GPA will be. Duckworth’s early research showed that self-control was a much more reliable predictor, but even that was not a good predictor of higher successes. As a lengthy New York Times piece summarized “People who accomplished great things, she noticed, often combined a passion for a single mission with an unswerving dedication to achieve that mission, whatever the obstacles and however long it might take. She decided she needed to name this quality, and she chose the word ‘grit.'”

When I think of grit, I think of one man: 1956 Olympic Champion Harold Connolly. There is a reason that you can, as journalist Pat Putnam described, “Talk to any hammer and weight thrower and it’s 5 to 1 he can’t go more than a minute without mentioning Harold Connolly’s name at least three times.” Through his grit, Harold left a wide-reaching impact on the world of hammer throwing. Putnam made his observation back in 1970, but it is just as true today, two years to the day after Harold passed away. 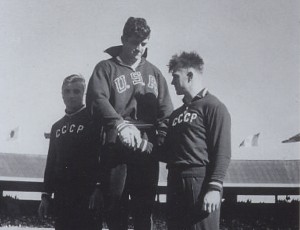 Harold Connolly’s 1956 Olympic victory was just the first of many successes.

When the article was written, Harold was mentioned so often because he had spent nearly two decades as the leading hammer thrower in the country. His grit led him to succeed despite a physical disadvantage and a late start in the event. People mentioned his name for the same reason people talk about Lebron James: love him or hate him was the standard everyone was compared to. Off the track, all reports were that he was a great guy. But on the track he was intense. In a Sports Illustrated article, fellow thrower and former weight throw world record holder George Frenn describer how intense Harold was before competitions: “All week Harold put the freeze on me with dialogue. Then the day before the meet he walks up and tells me he’s going to break my world record. And, he says, he’s going to use my weight to do it with.” That was also the case when former New York Times sportswriter Robert Lipsyte described how he first met Harold at a meet in 1966: “Surly that day, he tried to psych out the young hammer thrower who eventually beat him, and he was dismissive when I asked him about reports that he had subverted the youngster’s Olympic training with misinformation.” His memoirs tell a better story on the eve of his Olympic victory. Harold and Al Hall made a fake divot in the training field beyond the world record and marked it with an American flag in order to intimidate rival Mikhail Krivonosov. Harold wanted to succeed and he would do what was necessary to get there. This was how his grit represented itself.

The Harold I knew was both exactly like this and nothing like this. After retiring as an athlete, I think his definition of success changed. Rather than meaning a far throw, it involved other kinds of success: success for his family, success for his athletes, and success for the sport. The latter point was how I met him and I would never describe him as surly in this role. Maybe he had just mellowed out with age, but more likely he realized that success in this area required different tactics; he needed to make more friends than rivals since everyone could benefit from his cause. But his efforts nonetheless displayed immense grit as he dedicated himself to the mission no matter how long it would take or what obstacles he ended up facing.

Inspiring people was the easy part. The way and authority with which he spoke did that naturally. I would not have dedicated myself to the hammer without his advice and mentoring. In speaking with US champion Kibwé Johnson this week, he told me that Harold was the first and most influential voice telling him to focus solely on the hammer throw even though at one time he was near the best in the United States in both events. Countless others tell similar stories of how he led them to throw, to coach, or inspired them to be better at both. The obstacles he faced came from the entrenched institutions that make up the foundation of this sport. From the high school sports federations, to the ignorant chair of the USATF Youth Committee, convincing people to change their ways in order to help others was not as easy as it should have been. Many have tried to do the same and given up. And while Harold did not ultimately succeed in the way he would have likely defined success (i.e. another gold medal), the fact that he kept with it inspired countless individuals and added to the sport.

Just as was the case 40 years ago, you can rarely have a conversation about the hammer throw without Harold’s name coming up. When I conducted a US Youth Hammer Throw Survey this spring, Harold’s name was frequently listed as a resource or inspiration for numerous individuals. Even those that did not list him were clearly impacted by the new opportunities he brought to the sport. The United States now is one of the top youth hammer throwing countries in the world. The next step is for it to become one of the top hammer throwing countries in the world at all age levels. Kibwé’s recent success has been a first step in that direction, but grit will be needed for Harold’s goals to be truly realized. I hope we can learn from Harold’s example and carry on his legacy by pushing through the remaining obstacles until the US becomes a true hammer throwing powerhouse.