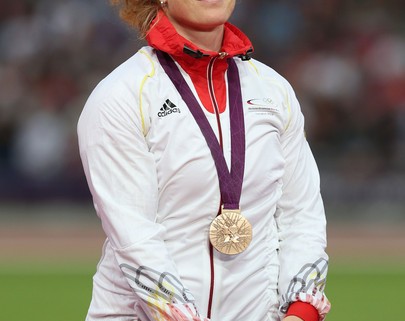 Are you ready for the hammer season? Ready or not, elite throwers around the world are getting ready to enter the ring if they haven’t done so already. On Saturday, the first major US meet of the season will take place at the Mt. SAC Relays with throwers like Kibwé Johnson, Libor Charfreitag, Drew Loftin, Mark Dry, Sultana Frizell, Jessica Cosby, Sophie Hitchon, Sarah Holt, Britney Henry, and several other elites. The IAAF Hammer Challenge kicks off in a few weeks in Tokyo. I’ve had six months to speculate, talk about, and analyze the upcoming season. So without further ado here are the 10 reasons why I think everyone should watch the hammer this year. And feel free to comment below with what you are looking forward to in 2013.

1 – 80 meters still has to be right around the corner. It was first on my list last year and remains first on my list this year. I want to see the women’s world record broken with the first throw over 80 meters. A half dozen women are within striking distance and just one of them needs to get there. Betty Heidler has to be the favorite to reach the mark first. Not only is she the current world record holder at 79.42 meters, but her recent inconsistency plays to her advantage in this regard. Throwers like Lysenko have been so consistent that I would be more surprised by a big personal best. But with Heidler anything is possible and a big throw of 80 meters is definitely one of them.

2 – The battle of the women in Moscow. Records make history. Championships make a legacy. There is a reason only hardcore hammer fans remember that Boris Zaitchouk was the first man to throw 80 meters: he never won a major medal or even qualified for the Soviet Olympic team. And his record was taken away in less than a month. But no one can take a title away from you (however you can take it away from yourself by testing positive as some recent examples have shown). The women’s hammer throw competition at the Olympics was the best hammer competition in history. Heidler may have the world record, but she choked at last year’s European Championships, and came up short at the last Olympics and World Championships after entering both competitions as the favorite. Tatyana Lysenko, on the other hand, won both competitions as the underdog. This year Lysenko will be at home with the World Championships in Moscow. Heidler won’t be distracted by the terrible officiating that affected her in London. And a half dozen other women will also be looking for the upset. It should be a great competition.

3 – Will any men finally step up to the plate? Krisztián Pars is the clear favorite for gold at the World Championships and it would take a major upset or injury to completely keep him off the podium. But who will join him up there? I’ve been waiting for the next generation of throwers to emerge for several years, but some of the “youngsters” I’ve identified in prior years are no longer that young: Pavel Kryvitski turns 29 this year; Yury Shayunou turns 26; and Sergej Litvinov Jr. 27. In the meantime Koji Murofushi is still able to get podium finishes at age 37. Primož Kozmus took nearly two years off of the sport and was able to get back on the podium. Neither Koji and Primož are throwing as far as they used to, but they keep getting medals since no one else is stepping up to take their place. I am waiting for someone to emerge in 2013 that will finally add a new member to the upper echelon of the men’s hammer. But if that doesn’t happen then maybe Koji can set another record as the oldest World Championship medalist in history.

4 – The return of Kibwé and a potential medal for America. I don’t hide my biases. I trained with Kibwé Johnson for years and am rooting for him to be the man that steps up this year. No America has ever won a medal in the hammer throw at the World Championships and Kibwé has a chance to do that if he returns to his 2011 form. In 2011 he was on fire, throwing over 80 meters twice and averaging nearly 77 meters over 15 competitions. Despite slumping last year he still made the Olympic final. Koji medaled last year with just 78.71 meters. That mark and more is possible for Kibwé this year.

5 – American Women, Yeah! While no US women made the finals in London, the US is actually entering a golden age of women’s hammer throwing. Russia is definitely the strongest nation now with four women over 74 meters, but America is the deepest nation in the world. Last season the US had eight throwers over 70 meters. In fact, these eight were all over 70.48 meters. Russia only had six throw that far. Belarus and Germany had just two each. Last year the American Record fell with a breakthrough throw of 74.19 meters by Jessica Cosby. Already this year Cosby has again thrown 73 meters. And young Amanda Bingson, who surprised many by making the US Olympic Team, improved her personal best last month to 72.18 meters. Unfortunately the rest of the world is improving as fast as America, but the depth of throwers is encouraging. A new American record and a finalist at Worlds are definitely possible this year.

6 – A hopeful adjustment of the new men’s qualifying standards. I can’t say it enough: the women’s hammer is one of the most exciting events in track and field right now. But the men’s hammer has been dealt a heavy blow by the new World Championships qualifying standards released last November. The ‘B’ standard was raised from 74 meters to 76 meters and the ‘A’ standard from 78 to 79 meters. To put this in perspective, it only took a throw of 74.69 meters to make the finals in London. That throw would be more than a meter under the qualifying standard for Moscow. Alex Smith qualified for the finals in 11th position, but even his personal best would not be enough to make the ‘B’ standard for Moscow. It is ludicrous to set a standard that a proven competitor and Olympic finalist has not even reached. This standard hurts consistent throwers and rewards throwers who have one-off big throws at questionable meets and then throw five or even ten meters under their best at the championship. Since marks from last season do not count, we also start from a clean slate this year. As a result I think there might be a record low number of qualifiers for the world championships this year and unfortunately that’s the best chance to make the IAAF reconsider their choice.

7 – Start planning for Hammer Time 2.0. It says something about the current state of the hammer throw when the two finalists to host the 2016 US Olympic Trials, Eugene and Des Moines, both must hold the hammer outside the stadium. Last week it was announced that Eugene will host the event for the third consecutive time and they are promising a “bigger, better, and different” show. With three more years to plan the event, there is plenty of time to make arrangements to put the hammer in the stadium. This would definitely make the meet bigger, better, and different. The solution for 2012 Trials hammer throw was ultimately a success. A temporary venue was built outside of Portland to showcase the event and thousands of fans showed up. But something was still missing since the rest of the festivities were two hours away. The crowds at Hayward Field cannot be replicated and they have always eluded us hammer throwers. The one time I got to run a victory lap at Hayward Field only made me want to throw in front of all of those fans even more. Hayward Field is, after all, one of the best athletics venues in the world. Hopefully we can enter the stadium in 2012, but for that to happen the planning needs to start now.

8 – The expanded IAAF Hammer Challenge will give throwers more chances to actually throw. On the bright side not everything is getting worse. The IAAF Hammer Challenge has improved this year by doubling the number of competitions in the series. While the set-up still has some problems, it will hopefully allow the top throwers to face off more often in the heart of the season and add to the suspense leading into the World Championships for both men and women. 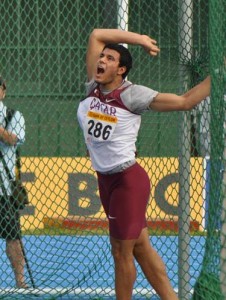 18-year old world junior record holder Ashraf Amjad will try to qualify for the World Championships this year, but with higher standards it will not be easy.

9 – Top junior throwers enter the big leagues. The future is also bright for the hammer throw. At last year’s World Junior Championships Ashraf Amjad of Qatar shattered the world junior record by throwing the 6-kilogram hammer 85.57 meters. More impressive is that he is still a junior for both this season and next season and that will give him a chance to extend the record even further. But his goals are actually focused on qualifying for Moscow and he has already debuted with the 7.26-kilogram hammer this year. The young women also show a lot of promise; last season 67 meters was not even far enough to win a medal at the World Junior Championships. Throughout the season 5 girls threw over 67 meters and 10 threw 64 meters. As they continue to develop the competition in the women’s hammer will only get deeper.

10 – Doping retests will make athletes think harder before doping. Recent news on the doping front has been very positive, in more ways than one. The playing field has undoubtedly changed in the past year. Since London we have seen suspensions of top hammer throwers Kirill Ikonnikov and Marina Marghieva. But I think the bigger impact will come from the retesting of samples from the 2004 Olympics and 2005 World Championships which took down two former World Champions: Ivan Tikhon and Olga Kuzenkova. Rather than just thinking twice about whether they will get caught, dopers now also have to fear that they will be caught in the future when testing procedures improve.