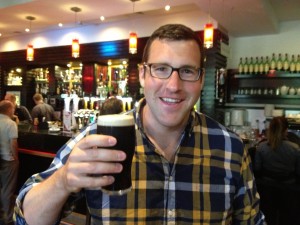 There are two Irish sayings I became intimately familiar with this weekend. Our national javelin coach Terry McHugh, an Irishman himself, first warned us before the competition that if we didn’t like the weather we just had to wait five minutes since it would surely change. The second saying came when we asked a meet official if they thought it would rain on Saturday. He responded by quoting another Irish saying: “You see that hill over there? If you can see it, it will be raining soon. If you can’t see it, it’s already raining.” The conditions this weekend proved that both sayings are more than just jokes.

The Swiss team travelled to Dublin for the European Team Championships over the weekend. With nations like Hungary and the Czech Republic in our group, I expected a strong hammer competition and based on my season’s best I entered the meet ranked just 10th among the 12 throwers. But our team needed every point it could get to avoid being relegated to a lower division for next years competition and I knew I was capable of climbing up the rankings with a good throw.