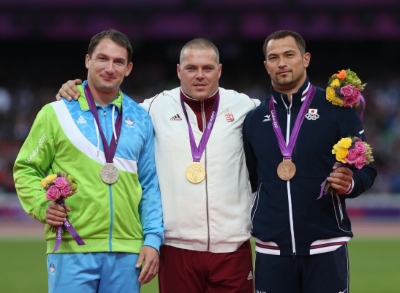 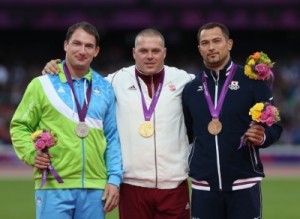 Everyone agrees Pars (center) is the favorite. But everyone has different picks for the podium this year.

As usual, the hammer throw will be starting off the action at this year’s world championships. The men’s qualifying round will take place on Saturday afternoon, where 29 athletes will battle to make it on to Monday’s 12 person final. Coming off of a dominant Olympic title, Krisztián Pars is the name to watch. On the one hand it might appear like he will have things easier this year since, as is expected after an Olympic year, the level of hammer throwing has receded slightly. This year saw just 11 throwers over 79 meters and 36 over 76 meters, compared with 16 and 47 throwers respectively in 2012. But on the other hand Pars is barely ahead of the competition. All of the top ten entrants have a season’s best within two meters of Pars. In other words, the competition should be close and the pressure will still be on Pars.

This year there is just one favorite: Olympic Champion Krisztián Pars. After years without a major senior title to his credit, Pars has finally shown he can win the big prize. Last season he won two major titles by dominating the European Championships and Olympic Games. He enters this year’s world championships looking for his first senior world title. He placed second two years ago and enters this competition with 23 wins in a row dating back to the start of June 2012. Of his eight competitions this summer, six have been over 80 meters. His worst competition this summer is 76.56 meters in terrible conditions in Dublin. Other than that every meet has been over 78.44 meter, making him at worst a sure lock for the podium.

Former Olympic and World Champion Primoz Kozmus has been on the podium at every Olympics and World Championship since 2007 and this season he enters the world championships with his best throw since 2011. Last year he competed sparingly with mixed results after ditching his new coach, but still managed to take silver in London. In July he had a solid win at the Karlstad IAAF Hammer Challenge, and also had good runner-up finishes to Pars in Budapest and Velenje earlier in the year. He is also known for bringing his best form; he has thrown a season’s best at every world championships or Olympics since 2007. And even in 2007 he won his first medal by throwing just 1-centimeter under his season’s best.

If Koji is able to repeat his win from two years ago he will break his own record as the oldest world champion and also become the oldest person ever to win a field event. As usual, Koji has competed little this year. Therefore, the question with Koji is a question of age since he will turn 39 in October. Does he still have enough power in the engine? His one competition this year had mixed signals. He threw just 76.42 meters, but that was still nearly four meters better than his one competition last year that preceded his Olympic bronze. Still, it looks like it will be tough for him to beat out Melich for another medal.

If history is any indicator, Ziolkowski will be a contenter this year. His string of major successes started with a win at the 2000 Olympics. Since then he has placed no lower than 7th at each Olympics or World Championships since 2000 (with the exception of 2003 when he did not compete). He last won a medal in 2009 and his form this year has been strong, producing his second best throw since the Berlin World Championships.

Along with Pars and Kozmus, Melich is one of my picks to make the podium. The 32-year old Melich first broke 79 meters 8 years ago, but it was not until the past year that he has truly joined the world’s elite. While he had some good results, he never had consistency and it was not until his sixth place finish in London that he actually made a final at a major championship. This year he has continued to mature and has more 80 meter throws than anyone but Pars and not placed lower than third at any meet this year.

Fajdek appeared to be on his way to a medal in London after a string of solid competitions leading up to the Olympics. But three fouls later and he was left in last place. This season he has continued to throw well with wins at the European Team Championships and the World University Games. But his season’s best is still below last year and his last few meets were anything but great: he was subpar at the Polish Championships and then fouled out at the Karlstad IAAF Hammer Challenge.

The former NCAA champion has slowly improved over the last few seasons and now finds himself in a position to easily make the finals and perhaps even challenge for a medal. This year he has a runner-up finish at the World University Games to his credit.

Strong contingents from Belarus and Russia are always a force to be reckoned with. In fact, the two countries are the only countries that will each send a full squad of three throwers to Moscow. They also get the added benefit of a home field (or near home field) advantage. However other than Sergej Litvinov Jr., no one among this latest generation of throwers has shown they can compete for a medal at recent championships and major competitions. Litvinov had some off-season injuries and a slow start to the season, but produced the second best mark in the world at the Russian championships. Someone like Pavel Kryvistki (BLR) or Aleksey Zagorniy (RUS) could also make an impact, but the competition with be tough this year. Another outsider is Dilshod Nazarov. Nazarov has never made the top eight at Olympic or World Championships level, but appears to be better than ever this year and had a strong win at Halle. Markus Esser (GER) also can always be a factor, but hasn’t been as strong as the other contenders this season.

Before we talk about the top athletes in Moscow, it is worth pausing to remember those Olympic finalists who weren’t able to qualify for Moscow due to the tough new standards. Of the 12 finalists, only 8 will be in Moscow. First off, 5th place finisher Kirill Ikonivov is currently serving a two-year suspension after testing positive for anabolic in October. Fourth-place finisher Oliksey Sykorsky and ninth-place finisher Kibwé Johnson have both had strong seasons but failed to even qualify. Sykorsky is currently ranked 8th in the world by All-Athletics, but he is only second best in Ukraine and since neither has the A-Standard his country can only send one athlete to Moscow. His performance from last year and this year both show he was a potential medalist in Moscow, but unfortunately Sykorsky was left off the team. Johnson’s 2013 season has actually been stronger than his 2012. But again since no American had the A standard only one person could make Team USA and Johnson’s low finish at the US Championships left him off the team. The last non-qualifier is the UK’s Alex Smith, who placed 11th in London. The standards were his personal best and he will be unable to repeat his performance.

Below are some predictions and rankings from various sources. The All-Athletics world rankings are simply that, a ranking and not a prediction of who will place high in Moscow. The rankings are calculated using a formula based on an athlete’s performances over the past year. Athletics Weekly and Track and Field News are the two leading english language athletics magazines and their methodology is more subjective.