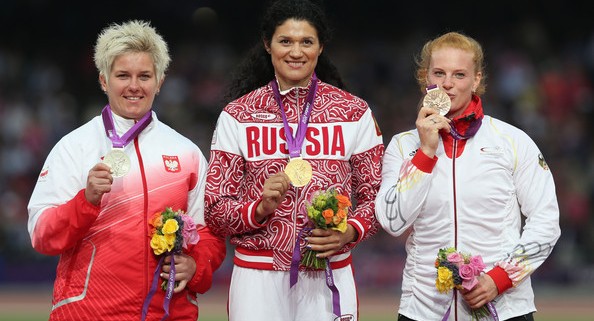 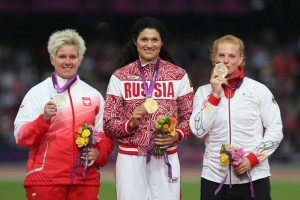 The medalists from London have shown they are once again the clear favorites in Moscow.

The one thing the men’s hammer throw final on Monday taught us was that anything can happen in the hammer throw. Krisztián Pars was the clear favorite and none of the leading athletics publications picked Pawel Fajdek to win a medal, let alone win gold. But the young Polish thrower lead the competition from start to finish and his dominance never looked in doubt. In hindsight, the result wasn’t a complete surprise. As I noted in my preview, the top ten throwers all had a season best within two meters of Pars which left him vulnerable.

With the men’s competition over, the women now take center stage and once again anything can happen. The women’s hammer throw is not as deep as the men, but the top five entrants are all within two meters of each other creating a similar situation to the men’s competition. Added to this is the unpredictability of the event. Tatyana Lysenko entered both the 2011 World Championships and 2012 Olympics having suffered significant losses at the hands of her rivals, but both times overcame the underdog role to win gold. Predicting this year’s winner is equally difficult. And, as is always the case when the top women come together, the world record will once again be under threat. When all these factors come together the women’s competition will likely be even more exciting than the thrilling men’s final.

On paper, the world record holder is the favorite. She is undefeated in seven competitions and taken down all of her rivals this summer. There is just one cause for concern: Heidler is rarely one that brings her best to the championships. After entering the last World Championships, European Championships, and Olympics as a favorite, she has thrown under her season’s best while her competitors have thrown season’s bests and personal bests. Most of Heidler’s throws this year have been around just 75 meters, which will not be enough to win. She will need to summon another gear in order to win in Moscow.
Note: Heidler did not qualify for the final after placing just 18th in qualifying, blaming her struggles on technical problems.

Lysenko enters the meet this year in a familiar role. As I mentioned above she was the underdog in 2011 and 2012. This year she again has losing records to all of her rivals, having lost her only match-up with Heidler and has been beaten twice by Wlodarczyk. Despite this, some view her as the favorite this year since she does hold the best mark in the world and will be in front of a home crowd. But even though I was one on the few people that tipped her as the favorite last year, I have more doubts this year since her overall form has been subpar. Prior to her great mark three weeks ago at the Russian championships, her best throw this summer was just 73.12 meters. While she had similar losses last year, she was still consistently throwing around 75 meters before the Olympics. The lack of consistency this year makes me wonder which Lysenko will show up in Moscow.

Wlodarczyk held the world record from 2009 to 2011, but then suffered a series of injuries that set her back from her competitors. Last year she started to return to form and won silver in London and she has continued to show consistency this season. She has won four of her eight competitions, and in the other four placed second only to Heidler. She improved her season’s best at her final tune-up meet and enters the competition in similar shape to 2009, when she not only won but set the first of her world records.

After the favorites, there is a core group of throwers between 72 and 75 meters that should challenge for a podium position if one of the favorites falters. Leading the group will be Wenxiu Zhang of China and Aksana Menkova of Belarus. Zhang actually did a victory lap in London after being told she placed third. However a successful appeal by Heidler of a bad measurement ended up bumping Zhang down to fourth. Menkova placed seventh. Both are hard to predict. Zhang has barely competed this year and her shape is unknown. Menkova, on the other hand, has competed but her results are often just in the 71 or 72 meter range.

Another athlete in that range is Kathrin Klaas of Germany. While her results do not rank her high entering the meet, she entered London in similar shape and walked away with a personal best and fifth place finish. After switching coaches in the off-season, she may be ready to return to good form. Three-time champion Yipsi Moreno of Cuba is the oldest of the top throwers and her age may be beginning to show. While she has been consistent this year, it no longer seems like she is capable of putting up a huge mark capable of winning. The sole newcomer is Eva Orban of Hungary. While she first competed in the World Championships back in 2005, she has never made the final. Strong performances and new national records in Halle and the Beijing IAAF Hammer Challenge show that she is now competing at a new level.

With Lysenko as the defending World Champion, Russia is entitled to four entrants at the World Championships. Predictably, they have put together a strong team with all four throwers over 75 meters this year. But other than Lysenko, the team has little international experience. Oksana Kondratyeva has the second best throw in the world this year at 77.13 meters, but was five meters under that at the World University Games where she took silver. Gulfiya Khanafeyeva has strong results too, but was even better in the lead up to London last year and still failed to make the final. Anna Bulgakova is the youngest of the group, but has had some more recent success including a bronze at last year’s European Championships.

There will be a strong English speaking contingent at this year’s World Championships, led by throwers from America, Great Britain, and Canada. After Russia, America has been the strongest nation in the world this year with five throwers over 73 meters and it is just as consistent. Three of them will be in Moscow: Amanda Bingson, Jeneva McCall, and Amber Campbell. Bingson is the only one of the group that has shown she is capable of a medal. A repeat performance of her American record could get her on the podium. McCall has had a great summer, including a win at the World University Games. And Campbell is the most experienced of the group, having made the finals at the 2009 World Championships.

In addition to the Americans, Great Britain’s Sophie Hitchon and Canada’s Sultana Frizell are worth noting. Hitchon recently set a new UK record and won the European Under-23 title. She proved her ability to compete by setting a national record to make the finals at the Olympics last year. Frizell has not yet matched her Canadian record from last season, but still is a threat to make the finals like she did in 2009 since 70 or 71 meters will likely be enough to squeeze in the top 12.

Below are some predictions and rankings from various sources. The All-Athletics world rankings are simply that, a ranking and not a prediction of who will place high in Moscow. The rankings are calculated using a formula based on an athlete’s performances over the past year. Athletics Weekly and Track and Field News are the two leading English language athletics magazines and their methodology is more subjective.